An intimate and exclusive hotel near Bangkok, Thailand

Explore the region
From the waters of the Tachin River and beyond,
there is a so much more Asian heritage to discover!

I discovered the centre of Thailand and to paraphrase Victor Hugo, my eyes caught a lush bath. The region’s natural slow pulse, the rhythm of the water and rural life amidst the rice paddy fields and infinite verdant lands evoke a sense of calm and peace. True connoisseurs of the water festival, the Thais revere this sacred land. This region abounds with its wealth of treasures. There is something for everyone including bird watchers, dreamers, history lovers, and those fascinated by spiritually enriching Buddhist temples. Accompanied by your guide from your home, 3 wondrous destinations await your discovery:

This historic city was the second Siamese capital after Sukhothai. It was destroyed by the Burmese during the 18th century. Its remains, characterised by the prang, or reliquary towers, and its enormous monasteries give visitors an idea of its past splendour.

Witness this city situated at the confluence of three rivers, and place that at the time had the most unique and advanced water supply network supply in the world. 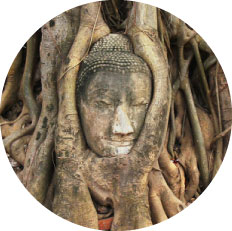 Still mostly unknown, this charming small provincial town stretches along the banks of the Sakae Krang River, away from the bustle of big cities.

Step back into time as you witness the fishermen, and farmers and gardeners that dwell in floating wooden houses.

Another voyage into the days of yore, where one can smell burning charcoal and wander about its intriguing century old riverside market, Talad Sam Chuk, A UNESCO World Heritage site. 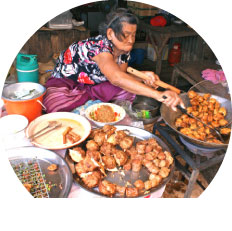 If you share the same values ​​of quality and hotel service as us, organise your holiday in Asia with our other asian addresses, all of which bear the Secret Retreats signature brand name.

Learn more about the
NEIGHBOURING COUNTRIES